This is not an exhaustive list of every change or cut to action and dialogue.  Rather the key moments that fill in narrative gaps or change context.  This summary presumes that the reader has already seen the movie before continuing.
The full script and sampling of storyboards can be found at the GI Joe Part 2 page:

Various pages - Same Old Story
There are various smaller cut scenes over the course of the film.  Such as page 119 where the Crimson Twins' psychic bond proves to be their undoing in a fight.  Page 153 where Wetsuit and Leatherneck are bickering with each other as they set the charges to breach Cobra-La.  Then finally page 167 where Flint and Lady Jaye are flirting with each other in the middle of a firefight.  All of these scenes were likely cut because they re-tread ground that had been well-covered by the TV series.

Pg. 7 and 8:  Pythona draws first blood
One key theme that Buzz Dixon included throughout his Joe TV scripts was that "war is not a game".  Most of his stories would have a character be seriously injured to drive the point home.  The movie takes this approach to the logical next step as, though the script direction is not always 100% explicit, it is clear that several characters die throughout the course of this film.
The first of these deaths occurs at the beginning of the film when a Viper searching for Pythona, is ambushed by her and backhanded off the roof of the Terrordome.  In the finished film, this is played down by being staged as a scream heard through a security monitor.

Pg.21 Frying tonight
During the first battle of the B.E.T,, the scene of Duke being nicked in the arm by a laser blast is absent.  When Serpentor fights him and throws the boa constrictor, Duke dodges and the snake hits the main dish of the B.E.T "and FRIES to a crisp".

Pg. 24 Abandoned
As Cobra retreats through the Himalayas, a frozen Motor Viper falls from his turret and is left to die in the snow.

Beginning on pg. 34 Meet the Rawhides
The initial scene of Beachhead inspecting the Rawhides was a last minute addition to the script, with the team members initially intended to be introduced separately in the scenes that follow.  Tunnel Rat and Big Lob's training exercise is heavily compressed.  With Beachhead explaining and showing the various booby traps beforehand, instead of referencing "surprises".  The two Rawhides originally ran the course separately instead of simultaneously.

Pg. 53 Two-timing
As Jinx escorts her off the premises, "Heather" makes a realisation: "Don't tell me he stood you up for l'il ol' moi?".  Confirming that Falcon and Jinx have a relationship and giving context to her anger during their scene in the motorpool on pg.58.

Pg. 54 Gotta get that PG rating
As Zarana drops her "Heather" disguise by the lake, she is topless (shown from behind).  This was added intentionally to gain the film a PG rating, akin to the swearing added to Transformers The Movie.  The scene made it to the first draft storyboards, where the decision was made to revise the shot to a two-piece bathing suit.  In the finished film, this is changed to a one-piece bathing suit, with more "open" staging as she throws Thrasher into the lake. 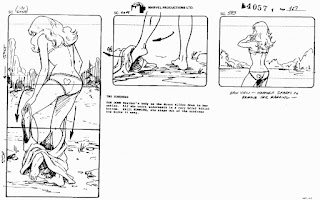 Pg. 64 Blind luck
As the Dreadnoks make their escape from the stockade with Serpentor, Jinx puts on her blindfold and charges the Thunder Machine with a sword.  Falcon, not understanding, tackles her out of the way.  prompting an argument until they see the smoke and damage coming from the stockade and run over, right into General Hawk.

Pg. 68 Glossary of Cobra-La
The script pauses in telling the story to give an entire page of reference to Cobra-La.  With detailed descriptions of their wholly organic society: Cities, roads and buildings composed of interlocking organisms.  The dress and appearance of Cobra-La Nobles and Technicians.  Even organic cars and street lights.

Pg. 74 He ain't heavy, he's my brother
One of the earliest themes proposed for the G.I Joe movie was that of an arrogant rookie Joe who is insubordinate, irresponsible and sometimes putting teammates lives at risk.  But gets away with it due to being related to a high-ranking member of the team.  Originally, this Joe was intended to be the son of General Hawk (Given the placeholder name of Kiddy Hawk in early outlines).  Hasbro were reportedly unhappy with doing a nepotism storyline, so the Joe who would become Lt Falcon was changed to being Duke's half-brother.  Even so, in the final script, Duke makes no bones about it as he asks for leniency during Falcon's hearing: "Falcon is my half-brother.  I pulled strings to get him into G.I Joe."

Pg .85 Enterprise not so Extensive?
After seeing Cobra Commander be further mutated by the spores, the Crimson Twins ponder their future in Cobra-La's new order:

Pg. 88 Meet The Sarge
When Falcon first meets and is then roughed up by the Renegades, Sgt Slaughter is forced to trounce all three of them in a fight before they obey the command of "At ease, disease!".  Immediately selling the idea that this group are so wild and ill-disciplined that only the Sarge can bring them under control.

Pg. 94 "That giant plant eats Joes alive!"
Once Quick Kick, Lady Jaye and the other escaping Joes are caught up in the giant trees and subdued, Golobulus exposits: "Ages ago, when the outer world belonged to us the Carno-Tree snared delicious game for our feasts."  To which, Pythona gloats "Now it traps only disgusting pests and parasites - like G.I Joe!" (she laughs throatily).

Pg. 100 The world reacts
As the fungus plants blast into orbit, we cut to Mission Control at Johnson Space Center In Houston. Where a technician (Vernee Watson Johnson) and an elderly German scientist (Peter Cullen) watch as the monitors fill up with hundreds of blips.  Thinking it could be a new Russian weapon, they immediately call in to the Defense Department.

Pg. 102 Push it to the limit
The montage of Falcon training at the Slaughterhouse was originally a lot longer and more involved, with the script directing "Falcon's Training THEME MUSIC creeps in under the preceding and continues over the Montage Sequence".  That there is no such theme music is a consequence of the decision, likely made for budget reasons, to not commission a dedicated score for this movie.  Instead, the soundtrack is mostly comprised of the existing shared score used for G.I Joe and Transformers, as well as the additional pieces used in Transformers season 3 (G.I Joe season 2 being produced too early to use much of it.).

Pg. 114 Don't stick your finger in that socket
Lt. Falcon breaks into the Terrordrome's communications room where two Tele-Vipers are performing maintenance.  He gets the drop on the first one but ends up wrestling with the second one, who is trying to jam a soldering iron into Falcon's eye.  With "DIE, MAGGOT!" appearing on the Tele-Viper's visor.  Falcon shifts position and sends the Viper pitching forward into the radio console, with the soldering iron going into an open socket and electrocuting him.

Pg. 122 Race against time
Once the Terrordrome has been destroyed, Dr Mindbender orders Cobra's aerial forces to take off and intercept Falcon, Slaughter and the Renegades.  While the group is being pursued by Cobra Morays who are jamming their radio and preventing Falcon from warning Joe HQ of the coming attack.
Meanwhile, Flint's team in the Himalayas are forced to call off their search for Roadblock's unit for the night.  Their Tomahawk passes right above, but doesn't spot, Roadblock and Cobra Commander continuing to trudge through the snow.

Pg. 123 Twenty Questions, but no answers
Sunbow crossover "star" Hector Ramirez reports live from the United Nations, where the US and Soviet envoys are arguing and accusing each other of having a weapon (the spores) now in orbit. 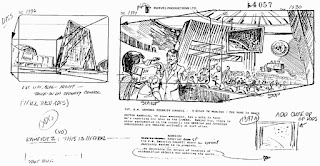 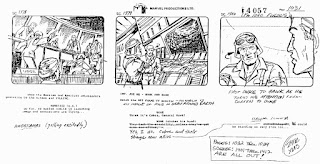 Pg. 130 "Waitin fer a gold-plated invite?"
During the second battle for the B.E.T, we cut away to see the Renegades' Devilfish hit the beach near a small fishing town.  Slaughter makes a run through the town, under fire from a Cobra Moray.  He dashes into a garage that the laser blasts set on fire.  Pulls off a tarp to reveal the Triple-T, smashes out of the building with it and hits the beach to take out the remaining Cobra pursuers.

Pg. 133 Second battle for the B.E.T
Back at the battle, Serpentor's squadron of Night Ravens drop cluster bombs on the Joe ground forces - destroying vehicles and "hurl BLOW TORCH and BARBECUE into the air."
Once the Armored Borers erupt from the ground, Scarlett's vehicle crashes straight into one, with her fate left unstated until....

Pg. 142 The Duke's last ride
The most famous change made to the movie.  As it is written, storyboarded and animated, Duke dies from his wound, with the script commanding "ABSOLUTE DEAD SILENCE on the soundtrack; no music, no voice, no sound effects, no nothing".
However, while this film was being animated at Toei.  The Transformers The Movie was released, with the resulting backlash over Optimus Prime's death prompting the decision to hire in B.J Ward (Scarlett) and Ed Gilbert (General Hawk) to record a short overdub.  Rather dubiously claiming that being impaled in the heart had sent Duke into a coma. 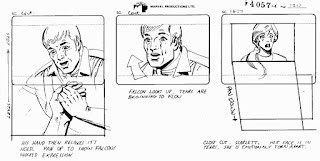 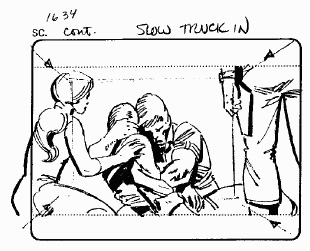 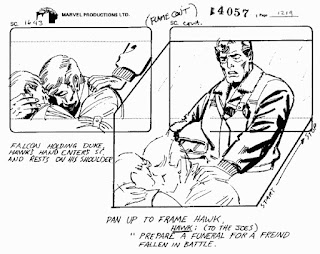 Pg. 145 Money talks
As Serpentor makes his triumphant homecoming to Cobra-La, B.E.T in tow.  The Crimson Twins attempt to sell a Cobra-La Noble on the virtues of a digital watch in exchange for pearls.

Pg. 147 Funeral for a friend
Duke's funeral, where his coffin is floating above the ground on four energy jets.  Once Hawk has read the eulogy he, Beachhead, Scarlett and two other Joes use their pistols to create a gridwork of intersecting lasers.  The vertical jets cut out, the coffin falls into the gridwork and is vaporized.
Immediately after, Dial-Tone runs in to tell Hawk he has located the B.E.T.
The following scene of Falcon insisting on going after Serpentor and being told to stay behind has been edited to remove references to Duke's death.

Pg. 151 A changed man
Falcon sits in the Joe Comms Room and tries unceasingly for hours to contact Flint.  Jinx comes in and when their conversation turns to how he used to be, he remarks "That was the OLD Falcon...the Falcon of a million years ago.".  Jinx tells him that she didn't think the old Falcon was so bad: "He just needed some sense slapped in to him".  As they move in to kiss, Flint comes in on the monitor.

Pg. 166 A rescue too late?
After Big Lob blows up the base of the Carno-Trees and sends them toppling, the captive Joes are unmoving, seemingly dead.  Destro, who leads the counterattack, taunts Flint's group while standing amongst the bodies of the fallen Joes "Your rescue attempt has been wasted.....on CORPSES!".  At that moment, Quick Kick comes to and sweeps Destro's legs out from under him.  The other released Joes all rise amongst the Cobra members and begin fighting.

Pg. 171 Hurry, hurry, hurry! Sale must end! Doors closing at midnight!
As the various organisms that comprise Cobra-La begin swarming the Joes, Quick Kick remarks that this is the weirdest battle he's ever fought in.  To which Shipwreck holds up the arm of a Cobra-La Noble who is cowering at their position and replies "Weird?  WEIRD?  HA!  I'll tell ya weird!  Every single one o' these clowns is wearin' a digital watch!"

Pg. 183 A stake in the serpent's heart
In the finished film, we last see Serpentor spinning out of control on his Air Chariot, his cape caught in the VTOL fans.  Later, after Golubulus taunts Falcon over his failure to stop the spores, he begins to flee Cobra-La.  He stops by Serpentor's fallen body, proclaiming "Death will not defeat you, Serpentor!  I shall reclone you more powerful than ever!"

Pg.188 Aftermath
Video of the ending storyboards from the Sony Maverick DVD, released in 2002