Among the many magazine trade adverts that have been put up for sale by PaperNostalgia on ebay, is this one from Marvel Productions, showcasing the programs that would be produced for the 1991 season. 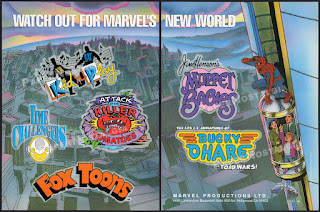 Whilst Muppet Babies, Bucky O'Hare, Kind N' Play and Attack Of The Killer Tomatoes did in fact air during that year, the remaining show Time Challengers did not.
It was previously unknown whether or not this was an actual greenlit show or a failed pitch.  Until I recently found a pack of over 80 model sheets online.  Suggesting that the show had at least three episodes scripted and storyboarded.
Under the production code of MP 4069-00 to 03, these model sheets were drawn up between late 1990 and early 1991.
The models themselves offer only breadcrumbs as to the premise of the series.  The main cast are a trio of teenagers, who all have alter-egos: Randy AKA Rerun, Trisha AKA Contempo and Maria AKA Futuron, along with their presumed mentor Mr. Chronos.  The first episode features many model sheets to indicate that the team travel to the Gold Rushes of the 19th century.  Model sheets for the third episode are for a character named Shana who appears to cycle through several time periods.
If anyone who worked on this show or has any other production material available that could shed light on this series, please contact the Archive.
MP 4069-00
Model sheets (53 pages)